We all knew it was coming. We just didn’t know when it would become official. Radio Shack has filed for Chapter 11 bankruptcy protection after suffering through 11 straight quarterly losses.

Much has been made about the causes of Radio Shack’s demise. This has been covered extensively in other forums. Here, I’d like to focus on their glory days. As a child of the 1970s, there was no finer place on Earth than a Radio Shack store! My mom would drop me off at the front door. I would then spend hours looking at all the items and talking electronics with the salespeople. Of course, this was a time when Radio Shack salespeople actually knew something about electronics and mothers did not get reported to Child Protective Services for leaving their kid in a store unattended. I learned a lot about consumer electronics and radio this way.

I could spend all day writing about Radio Shack products that I have owned and loved over the years. These 4 were my favorites:

This wasn’t my first record player. My grandparents gave me a General Electric portable for Christmas when I was 4. Four years later, this was my first stereo. Also one of the first electronic devices that I purchased with my own money. I still remember proudly walking up to the counter with 32 mostly one dollar bills (sales tax was 4%), pointing at the stereo, and telling the guy behind the counter “I want one of THOSE!” It’s a rather unique design: one of only two phonographs I’ve ever seen with the tonearm located behind the platter instead of mounted on the right side.

8 days after I bought that little red stereo, I received this Archer Space Patrol Base Station for Christmas, 1972. Very soon thereafter, it became my favorite piece of electronic equipment. I already owned a pair of walkie-talkies, but they were nothing like this machine. For starters, it received all 23 CB channels. Unlike the cheap regenerative walkies, this baby had a sensitive superheterodyne receiver. Combined with a long antenna (about 5 feet), the Base Station allowed me to listen to all CBers in my area. Another advantage: the transmit crystal was in a socket instead of soldered to the board. This allowed me to easily switch out the supplied Channel 14 crystal and replace it with Channel 21 which was used by most of the CB stations closest to me. The external mic provided a quality sound. Using 6 “D” cell batteries gave this Archer an honest 100mW power output. I sounded like I was using a “real” CB radio, not a typical off-frequency kiddie walkie-talkie with crummy audio. Later, I constructed a crude 1/4 wave ground plane antenna by duct-taping wire to a bamboo fishing pole. Mounted it on the upstairs deck and ran wires along the railings for radials! I also increased the power output by using a 13.8VDC CB power supply as an “AC Adapter.” I used this for 3.5 years until finally saving enough to buy my first “real” CB in the summer of 1976. Best $30 that Santa Claus ever spent! 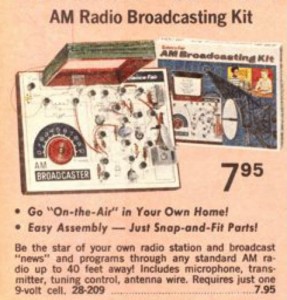 The Science Fair AM Broadcaster was introduced in 1974. Instantly, I wanted one! I’ll never forget the eager anticipation of putting the kit together, winding the coil, connecting the 9-volt battery, and then…the moment of truth…talking into the microphone as I slowly tuned my radio across the dial. Would it work? IT DID! IT WORKS, IT WORKS! I was the happiest kid on the planet as I “played DJ” for my family and the next-door neighbors. Shortly thereafter, I read some library books and learned how to modify this little transmitter for extended range. Eventually, I got it to transmit about a mile 😉 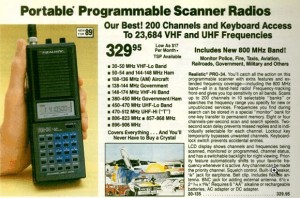 I got hooked on public service band monitoring when I was given a Wards Airline 6 band portable radio for my 9th birthday in 1973. Later, I messed around with crystal scanners. Also owned one of the earliest programmable scanners: the Tenelec MCP-1. (Anyone else remember those?) But the PRO-34 represented a quantum leap forward for me. Being used to 16 or 20 channel capacities, I thought TWO HUNDRED channels was simply amazing! The frequency coverage of this scanner was also amazing. It could hear EVERYTHING! I carried it everywhere for about 2 years until I foolishly set it on the roof of my car while I fumbled for my keys. You can guess what happened next. About 1 mile down the road, I realized what I had done. Of course I went back and looked everywhere, but my beloved PRO-34 was gone. Since I did not find it smashed along the road, I assume someone grabbed it before I had chance to come back and search. Replaced shortly thereafter by a Uniden Bearcat 200XLT.

As the song goes, “these are a few of my favorite things” from the heyday of Radio Shack. It has been a sad, slow demise for what was once a cutting edge technology company. The Shack may soon be a thing of the past. But we’ll always have the memories. If you’re lucky, you also have a few Realistic, Archer, Micronta, Science Fair, Space Patrol, Clarinette, Modulette, Supertape, Concertape, NOVA, Optimus, Mach Two, SELECTaCOM, SERVO-ROTOR, Chronomatic, Flavoradio, Patrolman, Jetstream, or Deskube products still in service around your house.