If you have a classic car with a stock stereo, you know the quandry. Put up with crappy sound or upgrade and lose the originality & value of the vehicle.

Barry Fone repairs and upgrades factory car stereos. He specializes in 8-track players. Being a former top level avionics tech, he really knows his stuff. Over 350 videos of his work are available online.

What’s REALLY cool is that he not only does repairs, he makes these units better than when they were new:

Best of all, he can do every one of these modifications (or all of them) without altering the outward appearance of the radio!

I’ve never met Barry and have no affiliation with him. I just happened to find his site while surfing and thought what he does is pretty amazing. Check it out if you so be inclined: 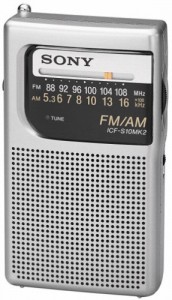 I was at Walgreens the other day when I saw these little radios on sale for $8.99. I remembered reading somewhere about how they were strong performers and could receive several stations. Curious, I grabbed one. After all, the cost was less than 4 gallons of gas.

I opened the package, inserted the batteries, turned it on, and was simply amazed at what this small receiver was capable of. The AM section is especially impressive. From my current location in Central Arkansas, the initial dial scan brought in Chicago’s WGN, WBBM, and WLS; WCCO from Minneapolis, and Atlanta’s WSB. Plus WSM, WLW, WWL, WHO, WBAP, WOAI, KOA, and several others. Selectivity is very good: I was able to hear Dallas’ KRLD on 1080 with KAAY just 40 miles away, pumping out 50,000 watts on 1090. By using the radio’s inherent directional capability, I can null KRMG/740 from Tulsa and hear Toronto’s CHWO. WLS and the Cuban station on 890 can be separated so each can be heard clearly. The FM section is also strong: I was able to hear a 50,000 watt station 50 miles north of me which is usually only available on car radios and upper tier portables.

This is a radio. It’s not a cell phone, an .mp3 player, or any other sort of high-tech device. It doesn’t have a digital tuner or a CD player. It’s a glorious old-school radio, complte with analog slide rule tuning dial and telescoping antenna. Other features include a tuning knob, an off/on/volume knob, and a wrist strap. That’s all. Just like the old days. The antenna is full-length and swivels. This allows you to hear those distant FM stations. By the way, FM selectivity is also very good. In my area, I have stations on 105.9, 106.1, and 106.3. I was able to separate all of them, simply by reorienting the antenna to the optimum position.

Battery life is amazing. Unlike pocket radios of the past which utilized a 9-volt battery, this Sony takes 2 “AA” cells. Since this equals only 3 volts (or 2.4 when using rechargeables), battery life was a concern. No worries. I’ve had the radio turned on pretty much continuously since I purchased it 3 days ago. The rechargeable NiMH batteries are still going strong.

I only have two complaints about this radio and they’re both minor: First, the earphone jack is mono only. Being of classic design, the Sony is designed to accomodate the old style mono earphone, rather than stereo headphones. But today, most people have stereo headphones or earbuds which they use with their iPod or other portable electronics. Since the headphones used with these devices are stereo and this radio’s jack is mono, you’ll only hear sound in one ear. It would be great if Sony had instead provided a jack which was compatible with stereo headphones. But this isn’t a big deal since you can buy an adapter plug for $2 which will allow you to hear in both ears. My other complaint is that the AM dial only goes to 1600Khz. (I told you this was an old-school radio!) This is a problem since the AM band has been extended to 1700Khz. In actual practice, however, the radio tunes past “16” and all the way to 1685Khz. So, only one channel is missed completely as 1690 can be received, albeit slightly off frequency. Again, not a big gripe for a radio in this price range.

It goes without saying this radio is well worth the money. I can’t remember the last time I had this much fun for less than $10! Laying in bed, scanning the AM dial at night, my mind suddenly flashed back 40 years to when I was a 6-year-old kid, listening for distant stations on my Lloyds 6 Transistor when I was supposed to be sleeping. If you have kids or grandkids whom you’d like to introduce to the radio hobby, this is an inexpensive way to do it. Buy this radio! You cannot go wrong for the money. The Walgreens sale will likely be over by the time you read this, but Amazon.com has these every day for $9.99 with FREE shipping if your order total is over $25. Let us know how you like the Sony ICF-S10MK2!

Heads-up, scanner fans! If your area has “gone digital” and you can no longer hear police/fire/EMS/public service communications, here’s a great deal on a digital scanner. RadioShack has put their PRO-106 on sale for $399.99. You save $100 at The Shack, but only for a limited time.

The RadioShack PRO-106 features 39,000 channels, easy-to-use menus, local area SAME weather alerts, and much more. The receiver is sensitive and works well with both digital and analog signals. In addition to trunked 800Mhz, it receives conventional VHF and UHF frequencies, as you would expect. Get complete specifications at RadioShack.com or at your local Radio Shack store.

Recently on a radio message board, a participant asked if the CC Radio was “all that.” Apparently, he/she had heard the hype, seen the advertisements here on Radio Geek Heaven, and wanted to know if the radio measured up.

I found my first CC Radio at a Florida pawn shop back in 2001. Sticker price was $29.99 and I paid $25 out the door. Price new was $180. Obviously, the pawn shop had no idea what this was. They just assumed it was a standard AM/FM portable and priced it accordingly.

FM and TV band performance (Channels 2-13) was very good. But it’s the AM sensitivity that really makes this radio a champ. Reception was nearly equal to my GM Delco car radio with fixed mast antenna. That’s saying a LOT since the Delcos with a whip are true DX hounds. What makes it superior to other portables? Better circuitry and a larger, heavier ferrite bar antenna. Most internal AM antennas are about 3 inches long. The CC’s is 8+ inches! You’ll FEEL the difference too, as soon as you lift the radio. They’re much heavier than your average portable. That’s a good thing.

Besides pulling in distant stations, the big ferrite bar also allows the CC Radio to be extremely directional. Again, this is a good thing, since it allows you to separate stations on the same frequency. Ferrite bars receive best off their sides and null off their ends. Just like a horizontal longwire antenna. So, this works best if the 2 stations are close to 90 degrees opposite of each other. Example: 1340Khz in the Fargo, North Dakota area. On a car radio, you can hear 2 stations fighting for the channel: KDLM/Detroit Lakes, MN and KXPO/Grafton, ND. Even though Grafton is twice as far away, the signals are relatively equal because the soil conductivity between Fargo-Grafton is much better vs Fargo-Detroit Lakes. It drops rapidly as you go east into Minnesota. On a car radio, you hear a mess of both stations. Standing in the parking lot of West Acres Mall and holding the CC Radio, I was able to receive both stations completely free of the other, simply by rotating the radio 90 degrees! Ditto for 1230 with Morris, MN vs Thief River Falls, MN. This is very useful if you’re trying to pull out a distant station that’s co-channel with a stronger one.

My only gripe was the LED frequency segments. They gradually began going out, one at a time, until there weren’t enough segments left to read the frequency. This took about 3 years. I didn’t want to hassle with sending it in for repairs, so I sold it “as-is” on eBay for $46. Which meant I made a profit of $21 and had free use of the radio for 3 years I understand this problem has been addressed and fixed in the newer versions. (Mine was a first generation CC Radio.)

The current version is the CC Radio 2. Since TV has gone digital and the TV band on these radios has been rendered worthless, it has been replaced with 2 meter ham band reception. The 162Mhz weather frequencies are also included.

C. Crane sells these new for $159.95 on their website. But you can save $10 by purchasing through Amazon.com. Price is $149.95 with FREE Super Saver shipping. For complete info, just click the link immediately preceeding or following this post.

In short, if you’re a radio DX’ing geek and can afford it, this radio is a must-have. To answer the message board poster’s question: yes, this radio IS definitely “all that.”