If you’re in the Upper Midwest, you’re no doubt familiar with Holiday Stationstores. If you’re over the age of 50 and grew up in Minnesota, you will also remember Holiday Village. Long before Walmart or even Kmart, Holiday Village was Minnesota’s original superstore! If Holiday didn’t sell it, you didn’t need it.

One of the things that made Holiday unique is that they had a huge selection of “branded” merchandise. Soda pop, motor oil, charcoal lighter fluid, fishing line, games, toys, paint, automotive supplies, even Christmas lights could all be found with the Holiday nameplate on them. Electronics, too. As you might have guessed, the radio and TV department was where I spent most of my time whenever Mom or Dad would take me to Holiday.

Recently, I came across a Facebook page entitled Fridley Holiday Village 487. This is a must-see for anyone who is interested in the history of Holiday stores. Apparently, the page creator was an employee at the Fridley, Minnesota Holiday Village (487 was the number that corporate assigned this particular store.) The page contains several photos, including some of vintage Holiday brand electronics. Each Holiday Village store carried the complete line. Some of the more popular items were also sold at Stationstores. This was especially true in smaller towns where there weren’t many places locally to purchase radio equipment.

This is a basic AM transistor radio from the early 1970s. It was manufactured under various brand names and in several different colors. Everyday price was around $4. Once-in-awhile, you could find a coupon in the local newspaper which would allow you to grab this little gem for the unbeatable price of $2.98! 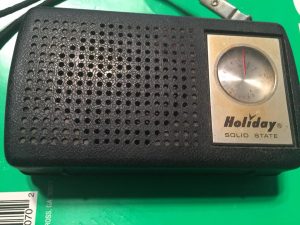 Another simple AM pocket radio. I believe this one is a bit older, dating from the 1960s. During this time, it was common for radios to promote the number of transistors they contained. 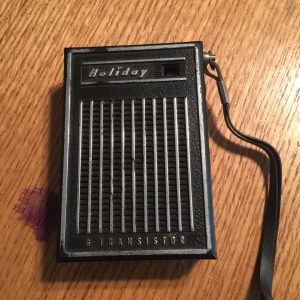 Everyone needs a clock radio! Also from the early 1970s, Holiday sold this unit for about $10. It wasn’t a fancy model. Sensitivity and selectivity were about average. But it did a great job of waking you up in the morning to the sounds of your favorite local AM station. 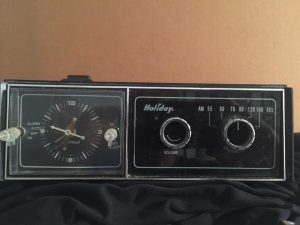 Holiday’s 1972 Christmas Catalog featured this neat-o pair of walkie-talkies. Like the first pocket radio, these were also produced with several different nameplates. They came in a blister pack and were displayed on peg hooks. I bought a pair in 1975, paying the same everyday low price of $9.98. Which was amazing, considering that price inflation ran rampant in the mid-1970s. Transmit frequency was 27.125 MHz (CB Channel 14), receive frequency was everything since it had a very wide regenerative receiver. Range was advertised as 1/4 mile but was actually more like 1/10 mile. This was your basic “kiddie talkie” from back in the day. 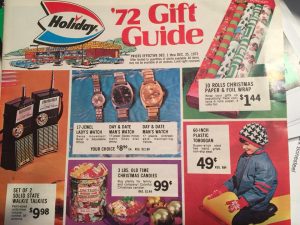 Another, slightly older pair of Holiday walkies from the 1960s. The interesting thing about this particular model is that it did NOT use Channel 14, as did nearly all of the “toy” transceivers. Instead, it used 27.065 Mhz which was CB Channel 9. Yes, the emergency channel! Why? Because Channel 9 was not officially designated as the emergency channel until 1969. After that time, most of the kiddie talkies moved up to Channel 14 where they remained until the 49Mhz migration of 1978. 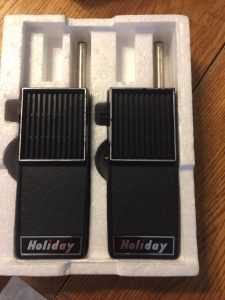 Finally, a vintage Holiday portable reel-to-reel tape recorder! This gem comes with everything you need, including earphone and carry strap. I’m not sure of the age on this unit, but I would guess it to be mid-to-late 1960s. By 1970, cassette recorders were becoming commonplace, replacing the reelers. Especially in portable units. 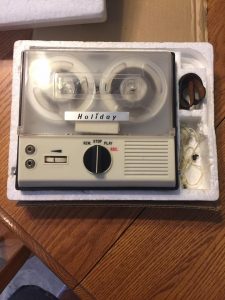 I hope you enjoyed this look back at the heyday of Holiday electronics! If you have additional photos, please send them to me so that I can share with everyone on Drew’s Radio Site!