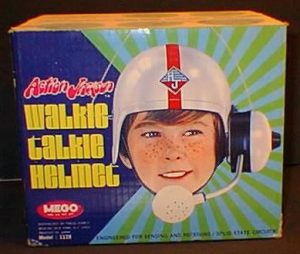 What in all of Radio Geekdom is THIS? If you are a child of the 1970s, you may remember the Action Jackson Walkie Talkie Helmet. These were manufactured by the Mego Corporation and sold at Radio Shack stores during 1973-74. This is a rare instance of Radio Shack selling an item produced by another manufacturer. Most Radio Shack merchandise was self-branded as Archer, Realistic, Micronta, Science Fair, etc., during this time.

Action Jackson was a 1970s line of toy action figures produced by Mego. Attached to the helmet was your typical “kiddie talkie” of the time. It had a simple regenerative receiver, operating on CB Channel 14. I’m guessing the output power was somewhere around 50mW. Typical range to another walkie talkie was around 1,000 feet. The thin one piece metal antenna was flexible in the middle with a loop on top. This allowed it to be clipped to the helmet or extended fully for greater range. Power source was a standard 9 volt transistor radio battery.

I was able to sweet-talk my parents into buying me one of these for Halloween 1973. I decided to dress up as a “spaceman”, so this was part of my costume. Slick, eh? If I remember correctly, the Action Jackson Walkie Talkie helmet sold for $14.95. This was somewhat expensive as you could buy two Archer Space Patrol walkie talkies with basically the same electronics for an identical price. Of course, you’re paying extra for the novelty, the helmet, and the Action Jackson name. These were great for talking while riding your bike. It gave children an incentive to wear a bike helmet long before this was required by law. Although I’m not sure how much “protection” this thin plastic helmet would provide. This toy would likely be banned today due to the long metal antenna. You’re gonna poke your eye out with that, kid! I sure had a lot of fun with this when I was 9-10 years old.