The best CB base antennas were manufactured in the 1970s and early 80s. Reason? They were made out of metal. In the early 1980s (1984, I believe), the Consumer Products Safety Commission began requiring that omnidirectional antennas meet certain standards. This was due to the large number of people who had been electrocuted while installing base antennas. Most of the “good” antennas were discontinued since they could not meet the new standards. The new antennas were of fiberglass construction. As everyone knows, aluminum is a much better radiator of RF energy vs a wire encased in fiberglass.

Interestingly enough, the new rules only applied to “omnidirectional CB radio antennas.” It did not apply to directional beams. A simple 9 foot quarterwave ground plane was now banned because it was “dangerous.” Yet, manufacture and sale of a Wilson Super Laser 500 beam with 8 vertical + 8 horizontal elements was still permitted by the federal government.

The new law also did not apply to antennas which were not specifically designed and designated as CB antennas. A few years later, “10 meter amateur radio verticals” and “25-30Mhz commercial band” antennas began appearing. Strangely enough, many of them bore a remarkable resemblance to the old CB antennas of the 1970s. Sometimes, a duck isn’t legally a duck, even if it quacks like a duck.

Here are some of the vintage base antennas we used “back in the day.” I will add more as time permits. If you have photos you’d like to share, I’d love to post them and give you credit! 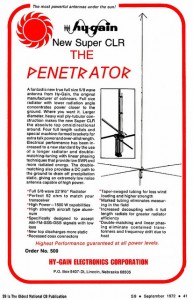 The famous Hy-Gain Super Penetrator! Also known as Super CLR or Penetrator 500, it was the best omnidirectional CB base antenna ever made! That’s just my opinion, of course, but it’s based on personal experience.

I used practically every omni on the market at one time or another and found that NOTHING could outtalk my Penetrator. Extremely solid construction using aircraft grade aluminum tubing and clamps. The last genuine Hy-Gain Super Penetrator came off the assembly line in 1980. Yet, you still see these antennas on roofs and towers in complete, undamaged condition. 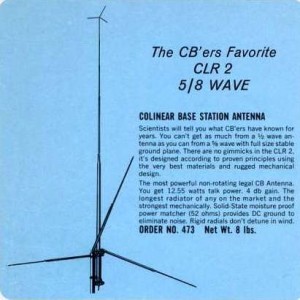 If you couldn’t afford a Super Penetrator, this was considered the next best thing by many: the Hy-Gain CLR 2. Known more commonly as the “Hy-Gain 5/8 wave”, “5/8 wave ground plane”, or simply “5/8 wave.” It was a very popular antenna which provided good gain, solid construction, and was relatively easy to install. There were several “knockoff” versions of this antenna, sold by Radio Shack (Archer), Royce, and others. As always, you get what you pay for. Hy-Gain antennas were made of aircraft grade aluminum and used quality clamps to attach the sections. The Radio Shack version used a cheaper grade of aluminum with sheet metal screws connecting the radiator and radial sections.

The quality difference between these two antennas became readily apparent in the first major wind or ice storm. The Hy-Gain CLR 2 didn’t bend, break, or shake apart. The Radio Shack 5/8 wave would almost always either bend in the middle or the screws would strip out, causing one or more of the radiator sections to slide down. When this happened, your SWR would go through the roof, rendering the antenna worthless until repairs could be made. In Minnesota, this usually meant waiting until spring when the snow melted off the roof. I know, since I owned both versions. Even so, the Radio Shack 5/8 wave was a big seller. The reason was it’s price: $34.95 in 1976. Frequently on sale for $24.95. By comparison, the Hy-Gain CLR 2 sold for $45-50. Again, you get what you pay for. 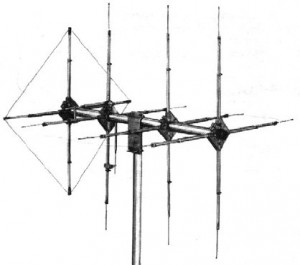 This was the “dream antenna” for all of us kids who were running vertical ground planes! Avanti’s Moonraker. Somtimes called the “Moonraker 4” since a 6 element version was also available. Truth be told, we dreamed about the Moonraker 6 or the grandaddy of ’em all, the Wilson Super Laser 500 (8 vertical + 8 horizontal elements.) But even at 13, I was realistic in my dreaming. I knew those two required a tower which my parents would never allow. The Moonraker 4 was small enough to be mounted on a telescoping push up mast (which my parents might allow.) Never happened, though. The closest I got was a basic 3 element vertical beam, turned by a TV antenna rotor.

The Moonraker 4 provided excellent directional lobes and nulls. Before the rampant inflation of the late 1970s kicked in, it could be had for about $125. Add a rotor and you’re still around $200. Hard to beat the cost-to-performance ratio on this antenna. 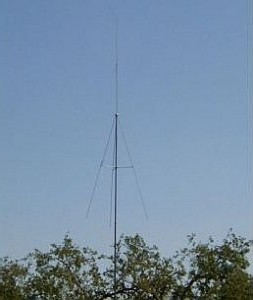 Technically, this is an Antenna Specialists M400. But we all knew it as the “Starduster.” There was a never-ending debate as to what type of antenna this actually was. Some considered it to be a 1/2 wave dipole, center fed, with the single vertical being 1/4 wave and the bottom elements comprising the other 1/4 wave. Others said it was just a 1/4 wave ground plane with the radials angled down rather than extending at a 90 degree angle from the base. In any case, it was a strong performer. The manufacturer claimed “5dB gain” which was certainly an inflated figure. Nevertheless, the antenna got out very well. I owned two of these at different times. They outperformed every other omnidirectional antenna I had except for one: the Hy-Gain Super Penetrator 500.

One big advantage of the Starduster is that it did not use a tuning or loading coil. This meant you could run substantially more than the legal 4 watts if you so desired.  I personally knew a guy who ran about 1,300 watts into a Starduster for several years with no problems. By comparison, the coil in a standard 5/8 wave ground plane would “cook” if you attempted to push more than about 200 watts into it. The other advantage was that it was practically invisible to the wind, due to it’s thin-walled construction and the fact that it only extended 9 feet above the mast that it was mounted on. In a 60MPH gust, the Starduster would barely move. It did have one weak point in it’s construction, however: the plastic “spreader” element which positioned the lower elements next to the supporting mast. These cracked very easily, especially after being exposed to sunlight for a few years. Then, the elements would flap in the wind until the threads stripped out and they fell away from the center hub. Aside from this minor drawback, the ‘Duster was a great antenna. Price in the late 1970s was $39.95-49.95, depending on the retailer. 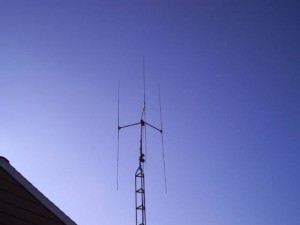 The Antenna Specialists Super Scanner was a very unique base station antenna. Was it an omnidirectional or was it a beam? Answer: it was both! You could use it as an omni and achieve 5.75db gain. Flip it to “beam” mode and it would deliver 8.75db gain in the desired direction. A control box at the base unit was used to select the desired pattern. Since no rotor was required, you could switch patterns instantly without having to wait for the antenna to rotate and change direction. Technically, the Super Scanner was classified as an electronically-phased antenna. Retail price in 1974 was $99.99. By 1977, Jimmy Carter-era inflation had pushed the price of a ‘Scanner to $139.99.

Other classic antennas included the Mighty Magnum and Super Magnum. Both of these were also made by Antenna Specialists. In addition to the legendary Moonrakers, Avanti manufactured the Astro Plane, Astro Beam, PDL 2, Sigma 5/8, and the strange-looking but incredibly potent Sigma 4. Radio Shack’s offerings consisted of 1/4 wave, 1/2 wave, and 5/8 wave Archer ground planes. In 1978, the .64 wave was added to their lineup. The Shack also sold a small 3 element beam which could be configured for either vertical or horizontal polarization. Cushcraft’s famous line of “Ringo” antennas featured models for CB as well as several ham radio bands. There was the “Golden Hawk”, a knockoff of the Starduster. Shakespeare gave us the Big Stick which is still around today. And didn’t Turner/Telex make an omnidirectional base antenna during the late 1970s? This was before Telex bought Hy-Gain and began manufacturing the redesigned (cheapened) Super Penetrator 500s.

If YOU have photos of classic CB radios and/or antennas from “back in the day”, send ’em to me! I’ll post them here for the world to see!