I purchased my first CB radio in August, 1976. Since I was only 12 and too young to drive a car, this meant I needed a base station antenna. Of course, the first place I looked was in my handy, dandy Radio Shack catalog. There were 4 options: 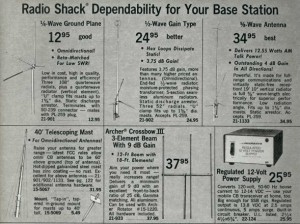 Because I was on a tight budget, I chose the Archer 1/4 Wave Ground Plane. Catalog number 21-901. This was the favorite of poor kids like myself who were operating mobile rigs off of old car batteries because we couldn’t afford a power supply! Mounted 10′ off the roof on an eave mount and fed with 35′ of RG58/U coax, it was a decent performer. It was also easy to assemble. I put the 1/4 wave together by myself in about 15 minutes. No SWR adjustments were needed or possible without cutting the antenna. Just fasten the sections together with the enclosed sheet metal screws and you’re good to go. The Radio Shack 1/4 wave CB antenna was a great example of something that was simple, easy, and worked.

The Archer 1/2 Wave Ground Plane (catalog number 21-902) is the only one of these that I never owned. At a price of $24.95, it provided a theoretical gain of 3.75dB over the 1/4 wave. In the catalog listing, it claims to have a 5 section aluminum radiator. This is incorrect. The 1/2 wave had a four section radiator. It’s big brother 5/8 wave had the 5 section radiator. In later years, the static discharge arrestor “loops” on the top of this antenna were replaced with a “top hat”, similar to the 5/8 wave.

The Archer 5/8 Wave Ground Plane (catalog number 21-1133) was Radio Shack’s top of the line base station antenna for 1976. Retail price was $34.95. Frequent sales brought the price down to $24.95. I owned 2 of these at various times, both purchased used. With 4.00dB gain, it was a solid performer. However, the construction quality did not hold up well in Minnesota winters. These antennas were notorious for being damaged during wind and ice storms. The aluminum used was not very strong, so the sections were prone to bending and breaking. Another cost-cutting move was the use of sheet metal screws to attach the sections instead of the superior clamps used by Hy-Gain and other manufacturers. Over time, repeated flexing of the vertical radiator during storms would cause the screws to strip and fall out. Then, the affected section would slide down, rendering the antenna unusable until repairs could be made. But since the Archer 5/8 wave was priced about 25% below the similar Hy-Gain CLR2, Radio Shack sold quite a few of these antennas.

The Archer Crossbow III 3-Element Beam (catalog number 21-933) was a later arrival to my rooftop. Priced at $37.95, it was your basic 3 element beam. It was small and light enough to be turned by an inexpensive TV antenna rotator. 12 foot boom, 18 foot half wave elements, and 9dB forward gain. This antenna could be mounted either vertically or horizontally. The price was later raised to $39.95 before being discontinued a few years later. I was fortunate to grab one of these little beams on clearance in October, 1980. At the $24.95 clearance price, it was a steal! My parents happened to be on vacation for a week. A 3 element beam, rotor, 20′ of masting, 3′ tripod, and 4 guy wire anchors magically appeared on the garage roof while they were gone. The amazing thing is that my did didn’t even notice until several months later. I just told him it was a “radio project” that I worked on while they were out of town. Something to keep me out of trouble, of course. I knew with an explanation like that, he wouldn’t make me take it down. He didn’t 🙂

I also owned the Micronta Regulated 12-Volt Power Supply (catalog number 22-124) at various times. Priced at $25.95, this item NEVER went on sale! There was no need for Radio Shack to put this item on sale. Since it was priced below most comparable power supplies, they sold a ton of these. The Shack also sold an unregulated supply with lower output for $19.95. This was designed for use with car stereos. I remember some kids tried to save money by purchasing the cheaper supply for CB use. Not a good choice. The 1.75 amp output was too low to power a transmitter. Also, because it was not regulated, you’d get a nasty 60 cycle AC hum in the background as you talked. Live and learn, kids!

And no, I never purchased the 40′ telescoping mast. I wanted to! I actually know one guy who mounted a .64 wave on his roof using one of these! I knew better than to push my parents too far with the CB antenna stuff. Well, most of the time, anyway!