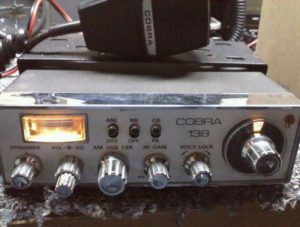 This Cobra 138 is the upscale cousin of Dynascan’s most excellent Cobra 29. These two CB radios are very similar with one important difference: the 138 adds upper and lower sideband capabilities. Appearance and performance are both excellent. This was one of the “Classic Cobras” that made this brand so successful back in the 1970s. 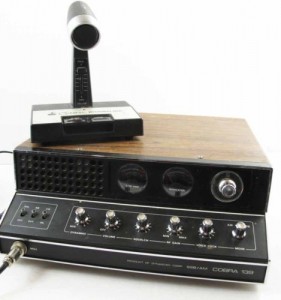 The Dynascan Cobra 139 base station is a 23 channel AM/SSB radio with plenty of features. It was considered to be the next best thing to it’s big brother, the Cobra 135. Shown here with the optional Cobra DynaMike Plus amplified desk microphone. Upgraded to 40 channels in 1977, it’s successor was the Cobra 139XLR. 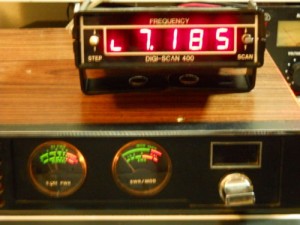 This is a Dynascan Cobra 139XLR with the addition of a Digi-Scan 400. In the late 1970s and early 1980s, this was considered the ultimate in CB frequency expansion capabilities. Sure, you could buy a Siltronix VFO, but now, you could digitally select the frequency of your choice! At the time, this Digi-Scan was cutting edge technology. It did not come cheap, however. The Digi-Scan unit sold for around $400. That’s in addition to the cost of the radio and conversion/modification expenses. 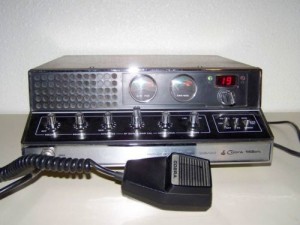 Cobra’s 142GTL was a successor to the Cobra 139XLR. Styling was nearly identical but the electronics were much more sophisticated. Dynascan’s 142 used an advanced PLL which allowed it to be more ‘capable’ of frequency modifications. I used a Cobra 142GTL as my main base station from 1982 until 1984. It was great radio with a very sensitive receiver, strong transmitter, and very clean audio. 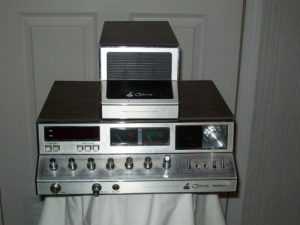 The Cobra 1000GTL is basically a Cobra 2000GTL without sideband. “Why was this radio ever made” would be a logical question here. Since these radios were fairly expensive, it didn’t make sense to shell out that kind of money and not have USB/LSB capability. It sure looked nice, though. Performance was solid, as you would expect from Dynascan CBs of this era. Contrary to popular rumor, the external speaker shown here was NOT an optional accessory. It came standard as part of the Cobra 1000GTL package. 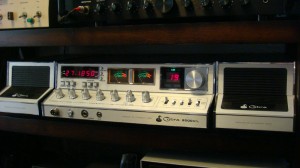 Here is the famous Cobra 2000 base station. Introduced in the early 1980s, this radio has been a favorite of serious CB operators ever since. The built-in frequency counter makes it especially popular with freebanders/outbanders. A very attractive radio, shown here with both matching speakers. Most of the Dynascan 2000s found today on the used market are missing one or both of the speakers. New, it sold for around $400. Even today, a used Cobra 2000 in good condition fetches $200-300 on eBay. Those which have NOT been modified and are in stock original condition are worth the most money.

The original Cobra CB radios were manufactured by Dynascan Corporation. In fact, Dynascan was responsible for developing the world’s first CB radio. The year was 1963. The new radio was called the Sidewinder. In 1993, the company name was officially changed from Dynascan to Cobra Electronics Corporation. Today, Cobra CB radios continue to be produced. It is probably the most well-known line of citizens band transceivers in the world.

Here are many of the Cobra model numbers. I have included a brief description of each radio. Many are featured here on Drew’s Radio Site. If you notice a particular model is missing from the list, please let us know!

COBRA 19XS – Inexpensive 1980s 40 channel AM mobile. Made in Korea. Similar to Cobra 19 PLUS but with a large analog meter instead of the newer LED bar graph meter.

COBRA 21X – Updated version of the Cobra 21. The mic gain control becomes DynaMike on this 23 channel AM mobile.

COBRA 29 – This deluxe 23 channel AM mobile was a favorite with truck drivers. Features RF gain and Delta Tune controls. Plus ANL and NB, modulation and transmit lights, plus that traditional Cobra large lighted S/RF meter.

COBRA 85 – Budget 23 channel AM base station. Features are minimal, but the Cobra 85 does have a large lighted S/RF meter.

COBRA CAM 89 – 23 channel AM base station. Resembles a Cobra 139 XLR but without SSB mode.

COBRA 89XLR – 40 channel AM base station. As with it’s 135XLR and 139XLR sideband cousins, the 89XLR replaces the CAM 89’s channel indicator dial with an LED digital channel readout. A combination SWR/modulation meter is substituted for the CAM 89’s modulation-only meter.

COBRA 135 – The “cadillac” of Cobra 23 channel AM/SSB base stations! In addition to all the knobs and lights, the 135 features a 1970s “flip petal” digital clock with alarm.

COBRA 135XLR – 40 channel AM/SSB base station. This is the 40 channel upgrade of the Cobra 135. As with the 139XLR, the previous channel indicator dial has been replaced with an LED digital readout. Otherwise, appearance is the same as the 135 it replaces.

COBRA 139 XLR – 40 channel AM/SSB base station. Very similar in appearance to the 139. Substitutes an LED digital channel readout in place of the 139’s channel indicator dial.

COBRA 142 GTL – 40 channel AM/SSB base station. Updated version of the Cobra 139XLR, adding RX and TX lights. Also, the lower front panel is silver on the 142GTL vs black on the 139XLR.

COBRA 1000GTL – Basically, a Cobra 2000GTL without SSB capability. Appearance is nearly identical. As with the 2000, the Cobra 1000GTL features a built-in frequency counter and requires an external speaker. Since the 1000 does not have sideband, the fine tuning knob is labeled “Delta Tune” instead of Voice Lock. Instead of an ‘AUX’ jack, you get a ‘RECORD’ jack. Also note the dimensions of the meters is slightly different. Meters are NOT interchangeable between the Cobra 1000GTL and 2000GTL.

COBRA 2000GTL – The one everybody wants! Considered by many to be the ultimate 40 channel AM/SSB base station. Built-in frequency counter. Numerous other features including DynaMike Plus (power mic), large rectangular S/RF and SWR/modulation meters, clock with alarm, headphone jack, aux (tape) jack, and external speaker. The 2000GTL does not have an internal speaker. Keep this in mind if you purchase a used one since many used 2000s do not include the speaker.

THIS IS A WORK IN PROGRESS TO BE CONTINUED. I LOVE THESE OLD COBRAS AS MUCH AS YOU DO! 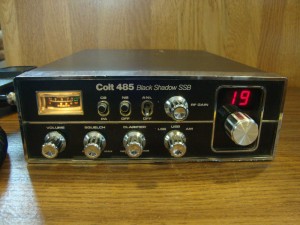 Colt manufactured an attractive line of CB radios. Because the brand was introduced in 1977, all were 40 channel units. This Colt 485 Black Shadow SSB is a full-featured mobile radio which includes single sideband capability. You didn’t often find Colts in discount or department stores. Instead, they were available primarily from CB specialty retailers. 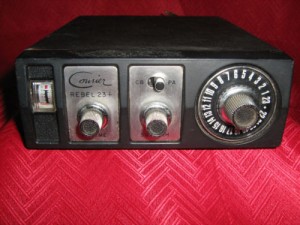 Dating from the early 1970s, the Rebel 23+ was Fanon Courier’s entry-level 23 channel mobile CB radio. Just the basics with volume, squelch, channel selector, and a small meter. This small and simple unit got the job done at a price everyone could afford. If you had purchased one new, you would have paid around $130. 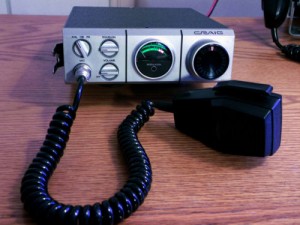 This good looking 23-channel mobile is a Craig 4104. Craig CB radios featured unique styling and good performance. Despite this, they were never big sellers. Because if this, you very rarely see them today. Where I grew up in Minneapolis, Team Electronics is the only retailer that I remember carrying Craig transceivers. 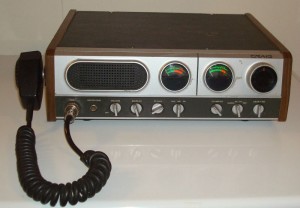 This Craig 4201 was the base station version of the 4104 mobile. Like it’s 12 volt DC sister, the 4201 also featured unique, sleek styling and good performance for the money. But since Craig CB radios never sold in large numbers, you don’t see many of them around today. Most of the surviving Craig electronic products from this era are car stereos with 8-track and cassette tape players. 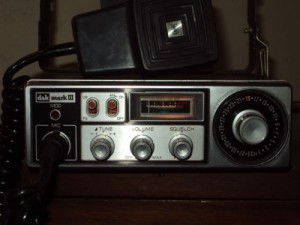 The DAK Mark III is a 40-channel AM mobile radio. Basic, but effective. All DAK CB radios are very rare finds today as they were only produced in small numbers. Once in a while, one will surface on eBay. Otherwise, you’re not likely to see a Mark III except on the Internet or in a vintage electronics museum. 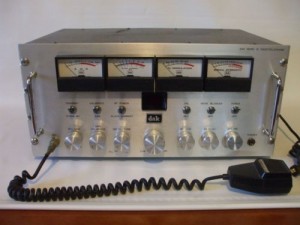 DAK Industries was a mail-order electronics company. The name comes from the initials of founder Drew Alan Kaplan. DAK CB base stations were very large units and strong performers. Relatively few were sold, so they are quite rare today. This DAK Mark IX Radiotelephone base station features 40-channel operation, FOUR large lighted meters, and the ability to be rack-mounted. 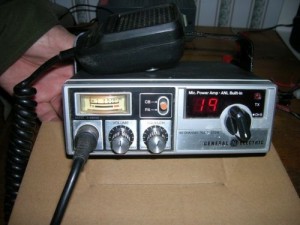 A simple but inexpensive radio, the GE 3-5804G featured all 40 channels, volume, squelch, and a lighted S/RF meter. Performance was about average for a CB radio in this price range. Notice the meter does not measure actual wattage on transmit. There is only black for “bad” and red for “good.” 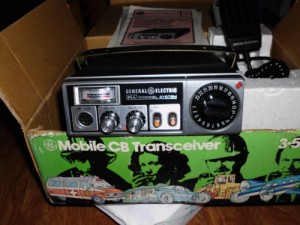 Yes, General Electric manufactured CB radios! Their complete line of several models included this GE 3-5810 23 channel mobile unit. It was one of their more popular models during the mid-1970s. Interestingly enough, some GE CBs utilized a 4-pin female mic plug while others such as this unit used a 5-pin DIN plug. 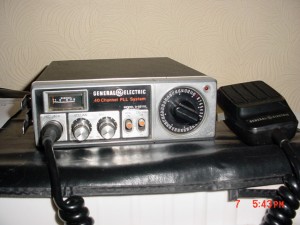 The 40 channel version of the General Electric 5810 was this GE 3-5811/5811B. The 5811 also utilized the 5-pin DIN microphone plug. Note that while the S/RF meter is the same size as on the previous 23 channel model, the graphics have changed. This meter design was shared with many Colt, Hy-Gain, and Midland CB radios of the day.

This is a Hy-Gain Hy-Range I. It was the entry-level model in Hy-Gain’s mobile CB line. A very simple radio that was easy to use with decent receive and transmit capabilities. Power/volume, squelch, and a small meter. Because it was relatively inexpensive, the Hy-Range 1 was a popular choice for those getting started in CB radio during the mid-1970s. 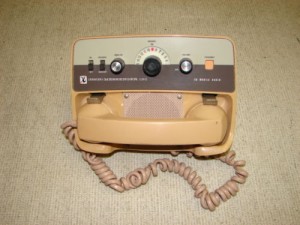 The Johnson Messenger 130, also known as “The Telephone CB.” This was the mobile version. Johnson also made a matching base unit, the Messenger 132. Performance was okay, but transmit audio quality suffered due to the limitations of a telephone receiver being used as a microphone. I could always tell when someone was talking on one of these since it had the same “nasal” sound qualities of a 1970s telephone handset. 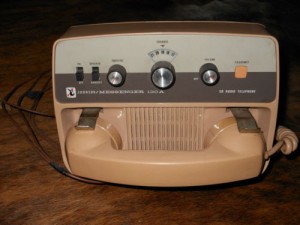 The updated version of Johnson’s Messenger 130 was the 130A. This model had a short run. Production began in early 1976 and ended later that year due to the new 40-channel units becoming legal for sale on January 1, 1977. The only difference I can see between the 130 and 130A is that the 130A’s speaker is incorporated into the plastic casing instead of being a separate assembly. 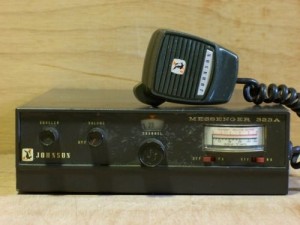 This dusty old jewel is a Johnson Messenger 323A. Big and heavy, but well built as were all Johnson CB radios. Solid performance, as you would expect. One disadvantage with this and many other Johnson models is that the microphone was hard-wired, rather than terminating in a plug. If you wanted to add a ‘power mike’, you were out-of-luck unless you wanted to rewire the radio internally.