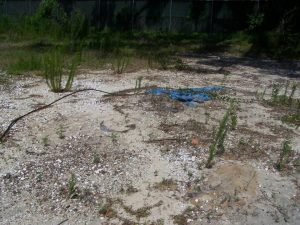 11 years ago today, Hurricane Katrina hit the Mississippi Gulf Coast. Whenever August 29th rolls around, it’s a sad day of remembrance and reflection for everyone who was affected. Especially those who lost friends or family in this massive storm.

I wasn’t there, but I came way too close for comfort. I left 27 days earlier. If I had stayed, I wouldn’t be talking to you right now. The apartment complex where I had lived for the past few months was located right on Front Beach in Ocean Springs. It was completely destroyed. I’m sure you remember seeing TV news footage of the Biloxi/Ocean Springs bridge. Nothing remained except support pillars and broken slabs of pavement. That bridge was less than 1 mile from my place. I used to walk across it several times per week.

Even though this was prime beachfront real estate, it remained undeveloped after the hurricane. There were plans for condominiums. The condos were actually planned before the hurricane. But after Katrina, the cost of insurance became astronomical, IF you could get insurance at all. This photo is where my apartment stood. Two years later, it looked exactly the same as it did after the storm. Five years later, it was still undeveloped. I haven’t been back to visit since 2010. But I’m guessing it looks pretty much the same. Hurricane Katrina was a horrible experience for everyone involved, both directly and indirectly.