Nearly every radio person has had other jobs at one time or another. Sometimes, this is to supplement the ridiculously low radio salaries. Other times, it is because one is “in between radio jobs” (the polite term for “I got fired”) and needs money NOW to pay the bills. This was the case with me back in 1986. For approximately 2 months, I delivered for Domino’s Pizza of Shakopee, Minnesota. 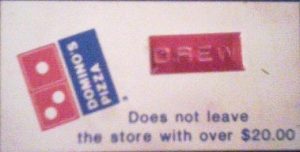 Domino’s was really not a bad gig. I was given a regular paycheck plus cash nightly as reimbursement for my car expenses. I drove a 1973 Buick Century which only got 12 miles per gallon, but the price of a gallon of gas in 1986 was only 90 cents. It all worked out. Delivering pizzas was still a safe way to earn a living back in those days. Saturday nights were the best. Most of my deliveries were to house parties. People would invite you in and tip you well. There was no shortage of drunks making “bad orders” (nobody home) on the weekends, so lots of free food for the crew to enjoy. If a pizza was undeliverable, it came back to the store and we got to eat it! “Crew pies” were a Domino’s Pizza fringe benefit that we all looked forward to. Oh, and the free name tags!