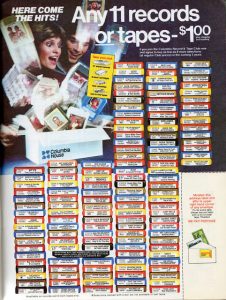 Many of us loved buying music when we were kids. Problem was, our allowance money didn’t buy much. An occasional 45 or two for 88 cents each (remember the “Tops in Pops?”), but that’s about all.

Enter Columbia House: 11 records or tapes for just $1.00. It sounded too good to be true. But you did it anyway because, what the heck, it was worth gambling for a dollar. (And later, just a penny!) So, you filled out the form, put it in envelope with your dollar, and sent it off to 1400 North Fruitridge Avenue in Terre Haute, Indiana.

A few weeks later, a LARGE box arrived from the previously-mentioned address. THIS WAS PURE MAGIC! It was true! You didn’t get ripped off after all! Excitedly, you tore open the box and there was the mother lode: 11 brand new albums of your choice! (Or 8-tracks, or cassettes.) Unbelievable! Time to lock yourself in your room, turn on the stereo, and not be seen for days!

Later, you realized those “8 more selections” you agreed to buy came at a grossly inflated price. But for today, you were on top of the world. You were in Record Geek Heaven and enjoying every minute of it!

Bonus points if you can remember all 11 of your introductory selections. In the spring of 1977, these were mine:

In a world filled with instant .mp3 downloads (legal and otherwise), kids will never know the sheer ecstasy of coming home from school, seeing that big brown box on the kitchen table, and ripping it open. Cheers, Columbia House!